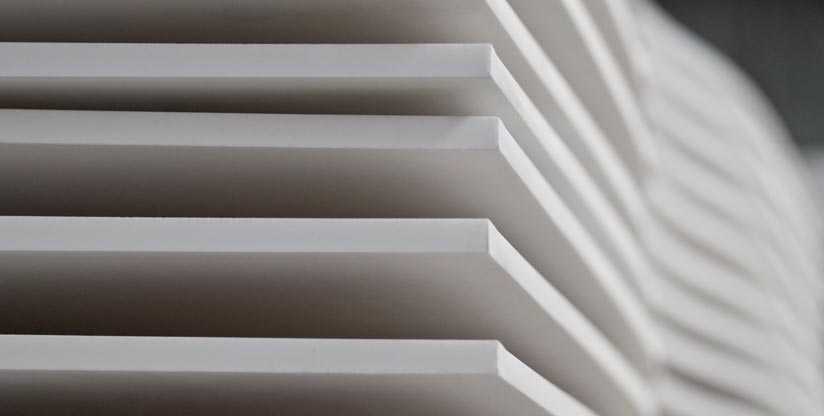 Corian® is a solid surface: a manmade material created by mixing minerals with acrylic resins. As hard as stone and as malleable as wood, Corian® technically surpasses both materials for its thermoformability and possibility to create an almost infinite number of invisible joints.

The Story of Corian®

The complete name of Corian® is DuPont™ Corian®. DuPont™ is the American multinational corporation that invented and patented this product, together with other familiar materials such as Nylon®, Neoprene®, Kevlar®, Lycra®, Nomex® and Teflon®. The word Corian® was inspired by that name of its inventor’s daughter, Cory Ann.

The story of Corian® dates back to the early 1960s, when a group of DuPont researchers came up with the idea of creating a material with notable technical and aesthetic qualities. After various experiments, they arrived at a very interesting result: a contemporary looking white material that could be used to create made-to-measure projects in all fields of the furniture industry. An indispensable material that no one had ever imagined before.

Presented to the public in 1967, it was immediately welcomed with favour. Since this time, thousands of architects, designers, companies and consumers have chosen Corian® for their projects, including important names like Zaha Hadid and Daniel Libeskind.

In 2017, to celebrate the fiftieth anniversary of its launch, Corian® became a brand to all effects and purposes, with its own registered trademark owned by DuPont. Protected for many years by a registered patent, now expired, Corian® has inspired other materials with a similar composition such as Hi-Macs® by LG Hausys, Staron® by Samsung, Hanex® by Lion Specialty Chemicals, Betacryl® by BTS and Krion® by Porcelanosa.

The Chemical Composition of Corian®

Corian® is composed for one third of transparent acrylic resin (poly(methyl methacrylate) PMMA) and two thirds natural minerals. The principal among these latter is alumina trihydrate (ATH), a white powder derived from bauxite, the mineral from which aluminium is extracted.

The Beauty of Corian®

Corian® is an opaque material that is warm and satiny to the touch. Naturally white, it can be coloured to any colour or texture, with the guarantee that the result will be homogenous throughout. Its strong point is that it can be invisibly jointed and thus create perfectly continuous and uninterrupted surfaces.

Where Corian® is used

It could be said that if you can think of it, you can make in Corian®.
Corian® is used for surfaces and furnishings. Thanks to its chemical-physical and technical properties Corian® is certified as a hygienic material and respects the international DIN EN ISO 846 regulation. It is also suitable for environments that require the highest standards of hygiene:

Corian® is ideal for surfaces that come into contact with food and food substances, such as:

Corian® can be used to finish:

In general, Corian® is suitable for all furnishings used by large numbers of people.

In the bathroom, Corian® can be used for:

Corian® is used in the home and in public spaces like hotels, residences and camping grounds; schools and nurseries; motorway service stops; shopping centres; spas, pools and gyms.

In the field of architecture Corian® is also used for ventilated façades because its smooth and non-porous surface is resistant to atmospheric agents and doesn’t permit dirt to take hold.